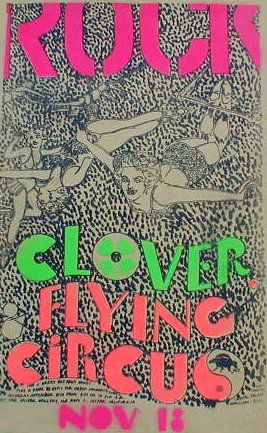 Benifit for Caspar Community School, November 18, 1967
(Ciambottis ex-wife was a teacher at the school)

Clover and The Flying Circus
Handbills and flyers from around that time: 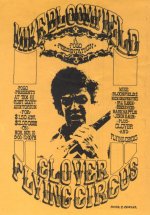 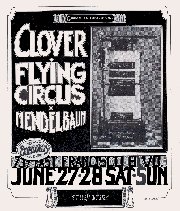 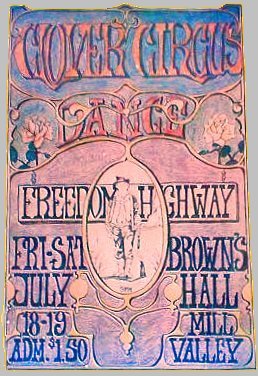 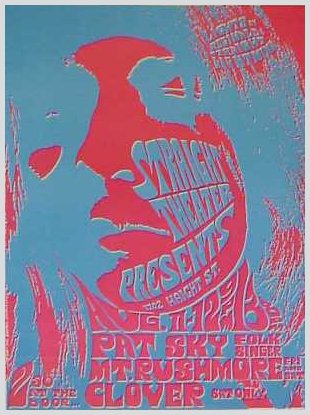 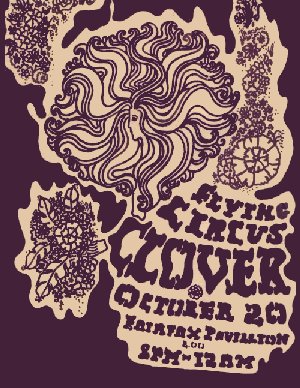 Clover
Straight Theater, December 22 and 23, 1967
following "The Blossom", a play by Michael McClure 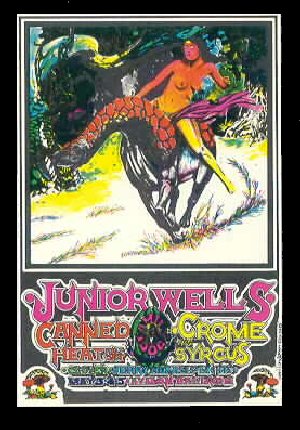 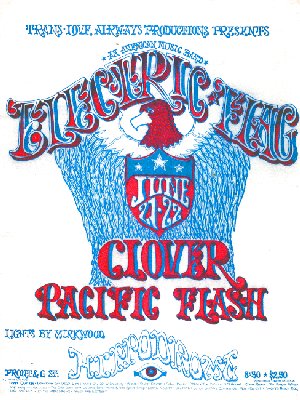 Read more about this historic poster and the limited edition reprint. 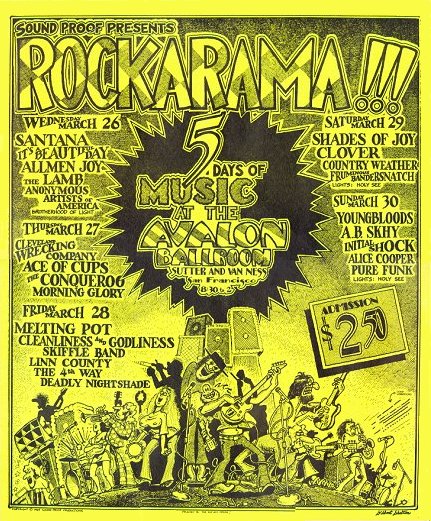 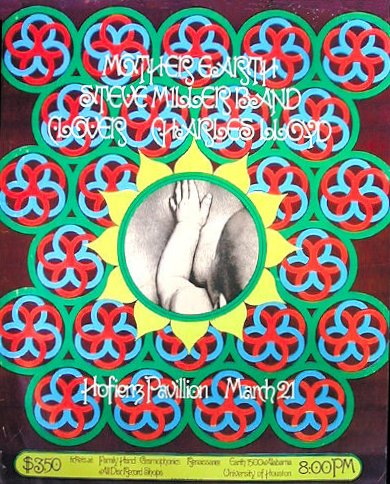 Clover - Flying Circus
Poster for a show at the Mill Valley Youth Center on July 18 & 19, 1970.
(Pictured are Andre Pessis from FC & girlfriend.)

Clover - Flying Circus
Poster art by Kevin "Kid" Haapala.
(Not sure if this concert was in 1970 but as the 5th and 6th are on a Saturday and Sunday it is most likely.)

Clover at the Fillmore West, San Francisco:
October 1, 2, 3 and 4 - together with Eric Burdon & War, Seals & Croft

Clover at the Fillmore West, San Francisco:
February 11, 12, 13 and 14 - together with Fleetwood Mac, Tom Rush 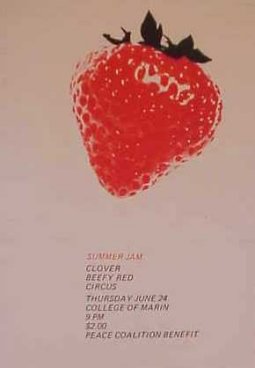 Summer Jam with Clover, Beffy Red and Circus at the College of Marin for a PEACE COALITION BENEFIT on June 24, 1971 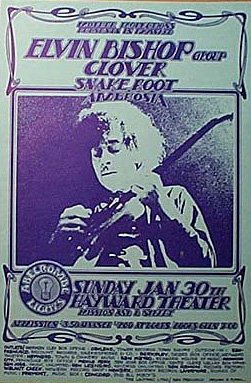 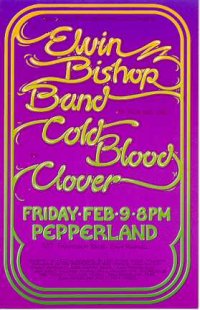 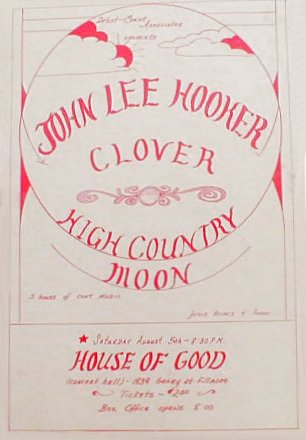 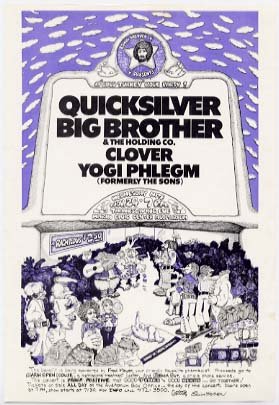 The New Riders Of The Purple Sage - Commander Cody And His Lost Planet Airmen - Clover
The show took place at the Sonoma State College Gym in Cotati,Ca. - Saturday, March 30, 1974 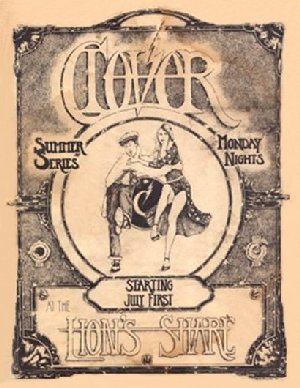 Clover
Lion's Share, San Anselmo, July 1974
Handbill Artist: Kevin Haapala
This image of the dancers also was adapted to become a 'logo' for a while,
inside a shamrock outline, for the Pyramid Associates / Joe Kerr management business cards. 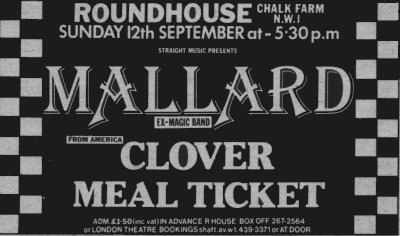 Melody Maker Magazine (September 11, 1976) wrote:
"Clover - currently in Britain and appearing at London Roundhouse on September 12 - are recording their first album with Nick Lowe, to be released by Phonogram early next year. Clover feature John McFee, the Hollywood steel guitarist who has played on albums by the Greatful Dead, Steve Miller and Boz Scaggs ..." 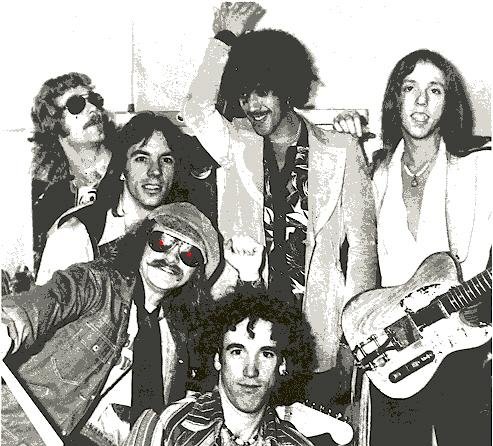 Clover was the guest group on Thin Lizzy's "Johnnie The Fox" Tour. 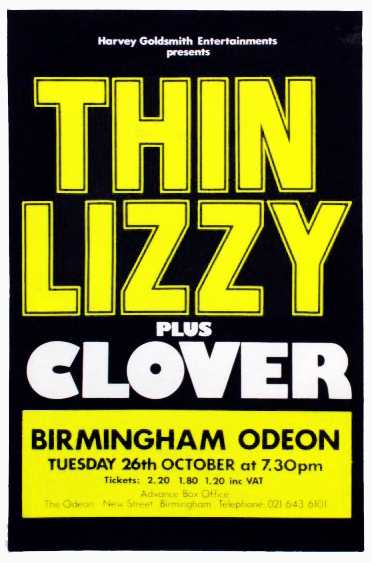 On the British Road again ...

Clover was the guest group on Lynyrd Skynyrd's "British - On The Road" Tour.

Seen from left on the stage are Southside Johnny, Huey Lewis of Clover, and Martin Belmont. 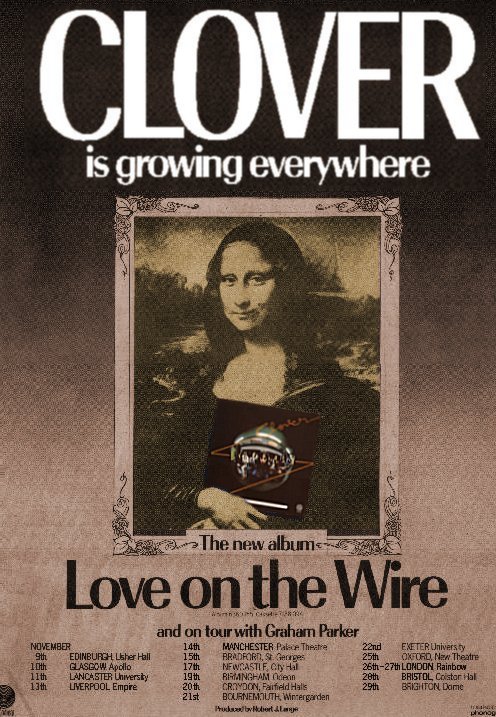 Advertisement taken from the magazine 'Melody Maker', Nov. 12, 1977
(original trade ad is black and white only) 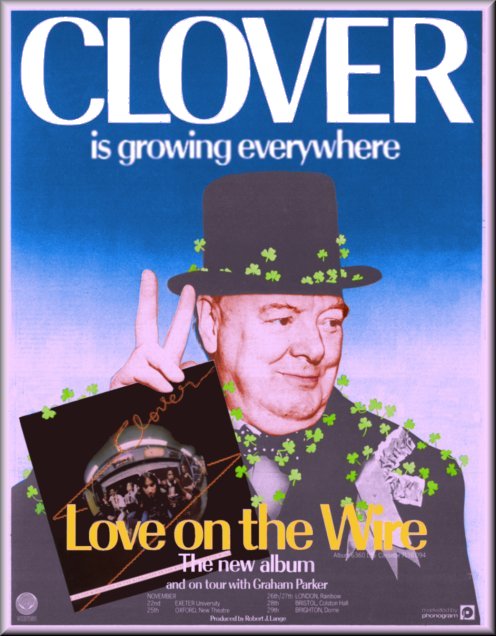 Advertisement taken from the magazine 'SOUNDS', Nov. 26, 1977
(original trade ad is black and white only)